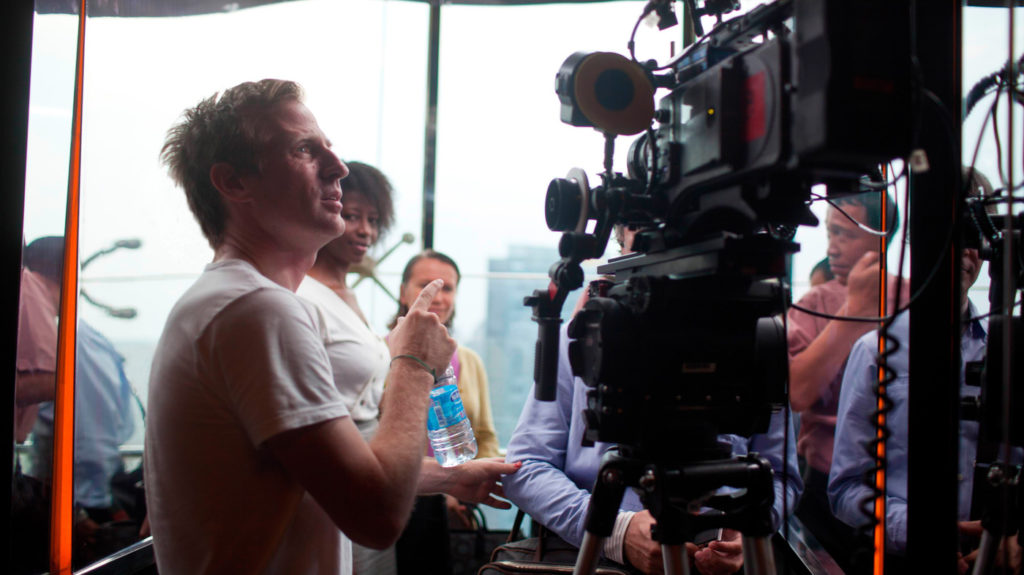 To mark the occasion, and following on from our recent label art collaboration with his skate brand Girl Skateboards, we thought it only fitting to look back on some of his most enduring and memorable contributions to the world of music videography.

Young Spike started off riding and shooting skate and BMX vids with his friends around Maryland, and going on tour with skate team Blind Skateboards. Before long he’d founded his own magazine – Dirt – landed a job with Transworld Sports, and was a regular contributor to BMX mag Freestylin’, shooting and writing about the emerging street sports genres.

In a matter of months he’d moved on to the up-and-coming world of skate video-making, putting together whimsical street skateboarding videos like the ground-breaking and highly-acclaimed “Video Days” (1991). The recognition gained from this led to music videos for bands he loved, like Sonic Youth and the Breeders.

Since then he’s been involved in a number of projects, ranging from television work, to writing, acting, and Academy Award-winning film-making.

However, despite this, in his formative years he says he was always more inspired by music than by film, such as the iconic Michael Jackson music videos of the 1980s.

Speaking to The Independent this year, Jonze recalled: “It felt so natural. Filming dance was like filming skateboarding. There’s one place to put the camera to make a trick work. The camera and the skater or the dancer are collaborating and when you lock together, it’s so emotionally satisfying. I got hooked.”

And his music videos do have a certain disitinct style to them – very much centred in on the medium of dance for expression, but with a handful of playful and prankish flair thrown in for good measure.

Over the years, Jonze has had a hand in some of the most distinctive, funny, versatile, and all-round badass music videos around – working for artists ranging from Weezer to Daft Punk. If we had the time we’d talk about them all, but since that would take all year we’ve narrowed it down to just the ten.

So, without any further ado, here are our top 10 Spike Jonze music videos – as voted for by our office:

Spike taught the 4 MC’s of Pharcyde to rap backwards and then films them rapping in reverse while doing simple things like “stripping”. When the footage is altered and synched up it becomes one of the most compulsive music video watching experiences of all time.

A talking, boombox-wielding dog wanders through the big city with a broken leg, ultimately choosing music over a possible love connection. There’s a message about the essentials of human nature in there somewhere.. we think.

This video is impressive for a number of reasons. For one, it’s a pretty inspiring video about the lesser-known struggles of up-and-coming professional gymnasts, giving viewers a glipse into their world. It also shows just how little is needed in order for a filmmaker to adequately tell a story. Gritty backing by the Chemical Brothers compounds its atypical aura.

Released a couple of years after FatLip leaving The Pharcyde, this song, the music video – and the accompanying documentary – all converge to give us an insight into the complicated mind of a once successful musician who found himself in hard times. A heady mixture of humour, melancholy, and surrealism – one great track.

It’s easy to get sucked into the story of this video, which features some teens who appear carefree at first but must cope with the jarring realisation (for the viewer, in any case) that they live in a military state. The work was part of a wider short film, directed by Jonze, called Stories from the Suburbs. Worth a watch.

Using some seriously cool camera trickery, Jonze pays homage to Happy Days with Rivers and the gang edited into some footage from Arnold’s diner. What’s even more remarkable is that the sequence was shot over the course of one day. The song makes for pretty good listening too we reckon.

Jonze plays to the huge changes in dynamics on this track by switching between slow motion movements and elaborate, enthusiastic dance scenes. You’ll be hard-pressed to find a visual sequence that more closely matches its musical accompaniment.

Jonze steps in front of the camera for a change to demonstrate some of his stellar dance moves. It’s impossible to watch this video without a smile on your face, and for that, we have to praise you, Spike. Added to that is the fact that it was filmed passer-by style on a mobile phone – amateur dancing, amateur videography, but the two marry together to create one wholly memorable, and eminently watchable, music video.

We’re pretty confident when we say that the Beastie Boys have NEVER made a bad music video … but ‘Sabatoge’ is probably the best of the lot. In a loving, hilarious tribute to 70’s cop-dramas they and Spike created a video that became one of the best early examples of experimental music video making.

This one features an idea that made everyone else slap themselves on the head for not thinking of it first. Put Christopher Walken in your music video! Of course, that’s a great idea! Why did it take until the year 2000 for this to happen? Walken has always been an enigmatic character. There’s his unusual vocal delivery, and his natural ability to play both mean villains and appear in comedies. As an actor, he can do it all. But, until 2000, who knew he could dance? For half the song, Walken wows you with his moves and by the time he jumps over the railing and flies all around the hotel, it’s just pure bliss. Beyond Walken’s dancing abilities, the video is also incredibly well-made. Spike Jonze takes us all over the place and shows an incredible knack for directing dance performances. It’s thrilling to watch, and like all of his videos, it’s fun and light-hearted.